Traditional Medicine: Saving Lives Throughout Pandemics for Thousands of Years

The essence of traditional medicine has always been to save lives. This has been true since thousands of years ago, but particularly true before the invention of pharmaceutical drugs, which had its origin in the 19th century, about 200 years till now. Many reasons have contributed to the fact that traditional medicine is now deemed as "alternative medicine".  Take China for example, the quotation about pandemics was from a book called "Yellow Emperor's Medical Classics". This book is generally dated by scholars to be between the late Warring States period (475-221 BC) and the Han dynasty (206 BCE–220 CE) with the latest time when it was bibliographical chapter of the Book of Han (completed in 111 CE), about 2500-1909 years from today. There were 321 documented pandemics in China (others argue 150–500+ depending on scales used) before the introduction of Western medicine in 1911. For thousands of years before 1911, the population in China survived and grew with the only medicine available: TCM.

Most of the so-called Traditional Chinese Medicine (TCM) nowadays are aiming to sell you a product that might or might not fit your body. Those are only herbal medicine products, not the essence of herbal medicine. Take the famous Lian Hua Qing Wen capsules for example, it's not for everyone and one truly need diagnosis to use it to be effective. True TCM herbal prescription needs to adjust for at least three factors: the patient, time, location. TCM can indeed save lives by healing acute and severe diseases, but no longer much practiced these days for some of the reasons lightly touched upon in the chat below.

Here's a casual group chat conversation initiated by an American friend who's an EMF expert who is curious about TCM and a teammate of ours:

Q by American Healthy Friend: Are there side effects from most TCM potions? I wonder why medicine has traditionally been used for healing, as opposed to optimization.

A by Herbal-Pal Teammate: The simple answer, contrary to many people think (I even heard the president of ACTCM said no side effects — not true for all), is yes. There’s no strong medicine without side effects, either western or traditional herbal medicine. Past, present, or even future. Why? Because the healing nature comes from the inclination (偏性) of herbs, you can think of the inclination as personality. Do strong leaders or specialists have stronger personalities? Most likely yes. Do they conflict with more people? Yes too. People with more mild personalities can serve as mediators to help other people work better in synergy on the team for the best outcome, same with herbal medicine. A common mediator is licorice, it’s mild and can get alone with most herbs to make 1+1+1+1>9. 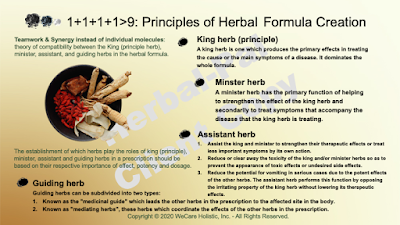 Most herbal medicine have been categorized as food by FDA because in labs on a micro level they are essentially medicinal foods — just with different personalities. Some are mild and can be used daily for the long term yet still won’t harm most people’s body (called “upper kind” (上品）in TCM terms - e.g., wheat sesame scallion caramel oranges etc belong to this category; another has stronger called “middle kind” (中品）- e.g., ginger scallions longan beans beef lamb etc all belong to this category, even the FDA banned ephedra — those are considered having tiny toxicity or between “ultra safe and ultra toxic” and can be consumed in moderation or with proper care; the other is  “lower kind” (下品), referring to those herbs that possess higher toxicity and should be used in small quantities or only to treat diseases — e.g., almonds, peaches, Sichuan peppers, centipede, aconite, pinellia. That said, “toxicity” is not meaningful without quantity. The difference in traditional medicine vs. pharmaceutical drugs lies in that side effects of natural herbal medicine are well known, that’s why they don’t really need double blind experiments. “Upper kind” can usually be consumed in large quantities without causing harm.

Before the invention of microscopes and chemicals etc, no one can invent a drug to block a receptor on a molecular level — not to mention monopolize it and achieve high profits like the Rockefeller drug story, so herbal medicine was traditionally used to treat and cure diseases and save lives. Not just to make you “feel well” and optimize.

Not only in China, but many cultures around the world have relied on traditional herbal medicine to meet their healthcare needs for centuries, just that China has more comprehensive records from thousands years ago, and TCM has adopted influence from other herbal medicine from the world, for example, saffron from Iran or chaga from Russia, and nowadays American ginseng, have all been incorporated into TCM to heal.

I knew many people and a few personally whose lives have been saved by traditional medicine, and I’ve been a user myself, that’s why I’m so passionate about it. However, with the advance of pharmaceutical drugs and modern techniques, traditional medicine practitioners face more and more questioning from people who do not understand the forward looking standards of traditional herbal medicine, and face more and more legal issues. For example, when a patient goes to a hospital to do a surgery, he/she signs a risk notification that they under the risks involved, yet the same legal protection is simply not there for traditional medicine doctors. The example of “getting ride of dead fetus in uterus” through TCM herbal medicine to avoid post-surgical infection is only one of the many why TCM doctors gradually become people’s last resort instead of the first doctor to visit for treating diseases — oh did I just violate the law, “treat diseases” is legally dangerous and a TCM doctors saying this in North America can risk jail time. ⚠️

Plus herbal medicine are natural gifts from God that can never generate high profits (unless being used improperly, like marketing a universally suitable product) and cannot drive GDP, hence not popular even in China unless during pandemics like SARS and COVID-19.

Q by American Healthy Friend: Almonds can be toxic in large doses? How much?

A by Chemist Scientist Friend: True of many food actually.

American Healthy Friend: I remember at the gym I used to go to in BJ between northern forbidden city and houhai (on di an men i think) where some olympic athletes train - they had this poster with suggested food combinations based on their synergies (in a healthy body and regular climate) - I wish i had a photo of it.

I'm aware that eating large amounts of food mixed with low metabolism can lead to diabetes, but not that aware of specific foods when eaten in high doses can be toxic. Besides alcohol or maybe poppy bagels or anchovies, I can't think of any food which is toxic in high amounts.

Herbal-Pal Teammate: Chemist Scientist Friend is obviously the expert in food toxicity down to micro levels. [ThumbsUp] The tip of Chinese northern almonds is toxic (from Josh and other Western scientists call cyanide) and there was documented safety as maximum 10 pieces/day for (unprocessed) ones historically, almonds on the market nowadays have tips off yet TCM doctors typically don’t prescribe more than 10-15g/day Chinese northern almonds or a little more for southern ones — unless necessary to treat (“support” to be legally correct) diseases. I’m not knowledgeable in safe dosage of California almonds but my friend once got serious allergy reaction after eating a bulk quantity that I gave her [Facepalm].

American Healthy Friend: Can't you just put those herbs in the computer drive and it will spit out the perfect concoction for whatever root is causing symptom?

Herbal-Pal Teammate: Great minds go alike - Tons of efforts have been made by western medicine or logical thinking scientists like what you suggested! AI TCM and related products have been on the marker for a while and got tons of capital and attention, just that they never achieve treatment effects as engineers would anticipate [Tongue] and most efforts ended up in vein. The reason is simple: TCM herbal medicine doesn’t work from a micro level like that (that’s why acupuncture  is more accepted because it’s more straightforward linear thinking 💭), using “one root cause —> projecting to one or many ingredients”, or “one ingredient chemical composition —> solves certain issue” simply don’t work, including the Nobel prize winning Tu Youyou’s work (her team is more like using the grammar of western medicine to study traditional medicine). Yes you can test the chemicals in labs — lemme find an article National Geographic which has the linear thinking of discomposing the ingredients, but that’s not how the herbal prescription works, the herbal prescription works to make one Yin-Yang balanced by diagnosing the position and nature of one’s disease, and herbal treatment uses macro  energy level of thinking such as five colors, five tastes, up or down, herbal pairs, synergy and interactions, to drive out evils or to harmonize based on disease stages, without the need to understanding the molecular structure of the herbs, but have a deep understanding of the energy and function of the herbs under different scenarios.🌿 That’s why it doesn’t need to know the chemical structure of virus 🦠 in ancient times and still allow China and most Asian countries that use it to survive thousand years of pandemics and grow into large populations to the point of too many [Chuckle]

TCM prescription is usually personalized and Wuhan creates patterns for “Lung Detox soup” because there’s not enough TCM doctors to serve so many patients. When feasible, of course, we encourage personalized consultation to add or minus from the standard sample soup. Differential diagnosis is based on 8 principals and 6 channels, the latter not even taught in most TCM universities. So those who didn’t receive good treatment effects have likely been treated by a doctor who’s not skilled enough — as in any medicine.

American Healthy Friend: We need herbal protection from EMF. There's western science on compounds but they're not holistic.

Herbal-Pal Teammate: For EMF, I do think using proper medical device (you are the expert!) or at least incorporating the usage of proper devices to prevent is a better than taking herbal remedies after facts. A TCM doctor who went through  three-month Wuhan COVID-19 was asked whether herbal remedies or protective wear helped their team achieve zero infection, her answer is: probably both, but we can’t tell, and no one would want to risk their lives to be in the control group of a double-blind experiment, or perhaps Italian healthcare workers already serve as control arm. An article in Chinese mainly talks about pneumonia near the equator,  analyzing that pneumonia is likely to be transformed into diseases of the digestive system or hepatobiliary system.

Smart Investor Friend: Remember I once made an educated guess that virus was already spreading here a while back?